Last year I was happy to attend The First Annual Evel Dick Big Brother Party at The Ranch Saloon here in Winnipeg. For those of you living under a rock, Big Brother (currently in 15th season) is a reality TV show in which a number of houseguests move in together for the summer and aren’t allowed to leave the house or backyard until they’ve been evicted by their fellow houseguests. The last one standing gets half a million dollars. Evel Dick was one of the most memorable houseguests in Big Brother history as he used vulgarity and the ability to really get under everyone’s skin as tactics to win him the game in season 8.

The Big Brother party was hosted by him and two other former houseguests, Janelle Pierzina and Porsche Briggs.

Last year’s event was a blast and I was expecting the same for this year. Sadly, I was VERY disappointed. Let me paint you a quick picture of last year…

This year Evel Dick brought former houseguests Kara Monaco, Hayden Moss, and surprise guest Rachel Reilly.  Tickets had to be purchased for $20, $15 if you downloaded the LEO app. The first 100 people to purchase tickets received a VIP picture pass, meaning not everyone was entitled to a picture with the houseguests. When I went to the office to pick up the tickets the woman at the front desk looked for the photo passes, but they appeared to have all be given away. Fair enough. The next 150 people to purchase tickets were to receive a commemorative autographed photo. I’m sure there were less that 250 people in attendance…so where is my commemorative photo? Anyone? Bueller? Bueller?

Before the event I emailed the Director of Marketing for “The LEO App” who was organizing the event for the second time, and asked him if there were extra photo passes. He replied and said he would check if there were extras – I needed three. I didn’t hear anything back! At the event he announced the first three people to put up their hand and ask a question to the houseguests would receive a photo pass – he had three left! At one point no one had their hand up except me, clear as day, and he went up to a random audience member to get them to ask a question. Ridiculous! At this point I figured there was no chance at getting my picture taken, until it was announced that if you bought the houseguests a round of drinks, you would get your photo taken with them. So just to make things clear…I paid $15 to go to an event that was free last year, a lack of communication kept me from getting photo passes, and now you want me to spend a minimum of $20 to buy the houseguests drinks that The Ranch was giving them for free? More ridiculousness.

During the Q&A portion of the event, the organizer was trying to get Evel Dick to wrap things up. Several attempts were made, but Dick wanted to finish talking. As a member of the audience, I shouldn’t have been able to see the lack of control that was constantly being displayed.

After all that, my friends and I being huge Big Brother Fans, we figured we’d get in line anyway for pictures. After all, Evel Dick did announce that EVERYONE could get in line for photos – more lack of communication I assume.

So we stand in line for a little over an hour. We get to the door to the room where photos are being taken, and the security guard won’t let us through because we don’t have a pass. My friends and I politely remind him how long we’ve been standing in line for, how letting three of us through will literally take two minutes or less, and then inform him that Evel Dick told EVERYONE to get in line. He protests and of course, I ask to speak with the organizer. The security guard doesn’t know where he is, although he should’ve been tending to the houseguests in that room to ensure things are running smoothly. The security guard finally tells us to find someone with a pass who has already gotten their picture taken, so I grab the first girl to walk out and politely ask her for her pass. I assumed I needed three separate passes for each of us, but alas, the security guard let us through with one. That whole song and dance we did was a waste of time considering all we had to do was get a pass from someone walking by.

FINALLY we get into the room and three of the four houseguests there were sitting on a couch for pictures, while the fourth houseguest Kara Monaco, was sitting at a table…texting….and not sitting for pictures. Perhaps if the organizer was in the room, he would’ve been able to rectify the situation…but he was no where to be found. Anyway, the houseguests were drunk by the time we got in there and couldn’t even sit up straight let alone pose for a decent picture. My two friends and I wanted separate pictures with them, as we did last year, but we were forced into one big group picture. A group picture that was taken without any warning. A group picture that is not up on Facebook after two days. One of the people in the room helping with photos took my cell phone so I would also have my own picture, and look how it turned out…. 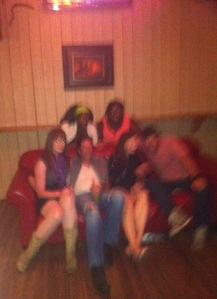 I’m EXTREMELY unimpressed with this year’s event and hope next year they’ll be able to redeem themselves. I’ll even offer up a few pointers on what they can do to make improvements 🙂

Error: Twitter did not respond. Please wait a few minutes and refresh this page.